We have had to learn to live with quite a few electrical brownouts here in Puerto Princesa. Dave has installed diesel generators to compensate and run our refrigerator and air-con, which he loves so much. The generators run on biodiesel, but when the brownouts last for 10 hours or more, it's also costly.


To compensate, we have added more solar lighting and recently, 4 large solar panels which now handle the water pump and lights in the kitchen, as well as a fan at my desk and a couple of outlets for laptops and such. All of our lights are LED.

We get all of our solar panels and lights(except for the one charging the electric motorbike) from a solar store in Puerto Princesa. They are in a breezeway before David's salon on Rizal Avenue. Moving soon to a store in front soon. 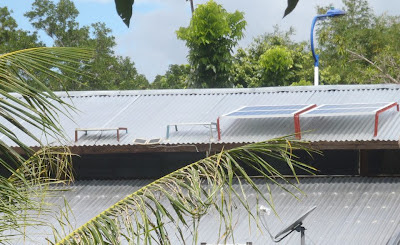 One of the problems we had when the power went out, is that it became dark in the kitchen and the water pump would not run. So Dave hooked those up to the large solar panels. This way if we are not around and no one can start the generator, the staff can still cook and have water.

All of our lights are on solar as well as electrical plugs which run my PC, three fans and all the LED lights.

Unknown said…
I always forget to prepare for big storms and hurricanes and buy a darn generator. It would be genius if every one of our homes were suped up with solar installations though, even if its just enough for a light bulb to light up.

Unknown said…
The topic is remarkable. I actually never think I could have an excellent read by this time until I find out this website. I am thankful for the information. Thank you for being so kind enough to have shared your information with us.
hot water heater price

Unknown said…
Thanks for this informative post and I would like to refer this post,solar fencing is hoping to see more posts from you. 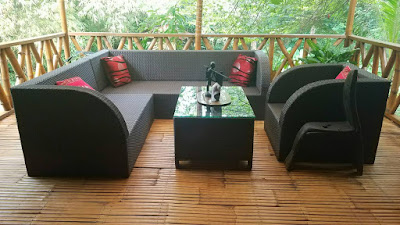 Just a short post to show off the newly expanded deck. Originally it was only around 6X8 feet, and when the bamboo flooring rotted since it was open and exposed to the weather, I had our carpenter make it a little bigger, and now I feel it's just the right size. I also had it covered. For expediency, since the rainy season was upon us and it was getting hosed every day, I had them use bamboo poles and a tarp to cover and protect it so it would not rot as before.
The new deck can now fit outdoor living room furniture, which I am happy to find out, is made right here in Puerto Princesa! The furniture is of synthetic wicker which we found out holds up much better in a forest than natural since too many bugs eat up the natural stuff!! 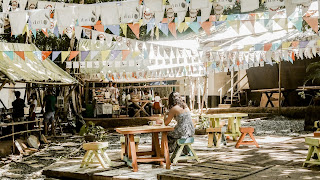 It's nice to have Binhi Mindful Market around. They opened in 2018 and have popped up at Canvas hotel, all the way up to El Nido with a collection of local farmers, artists, cheesemakers, bakeries, and craftspeople, live potted, and bundled herbs and produce, etc They help people like me make product and food choices that are sustainable while helping all the local vendors.

Lately in Puerto Princesa, they have teamed up with Rurungan Sunday Market at their compound off Abanico road. They also had a sustainable market every first Sunday of each month.

Rurungan sa Tubod Foundation formed in 1999 as a livelihood project for local community weavers to continue the traditional way of making pineapple fiber cloth. They weave the cloth called tepiña on-premise on native wooden looms to make beautiful fine shawls and other clothing items. The founder, Czarina Lim, raised her children among them, and now that they are grown up, have taken the concept of a sustainable crafts a few steps fu… 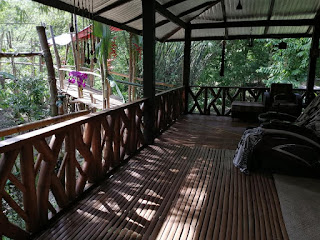 Dave and I are having a hard time walking around our hilly property these days. We have a bamboo deck from our bamboo groves, but I was starting to get stir crazy as our property is still fairly raw and it is muddy to walk around during the long rainy season. Our little deck started to feel confining. I came up with the idea to make a bamboo jungle walk along our hillside so we could take our walks but not get muddy or slip and fall on the little hills.

This is the result of harvesting 6 bamboo groves which dearly needed to be thinned.